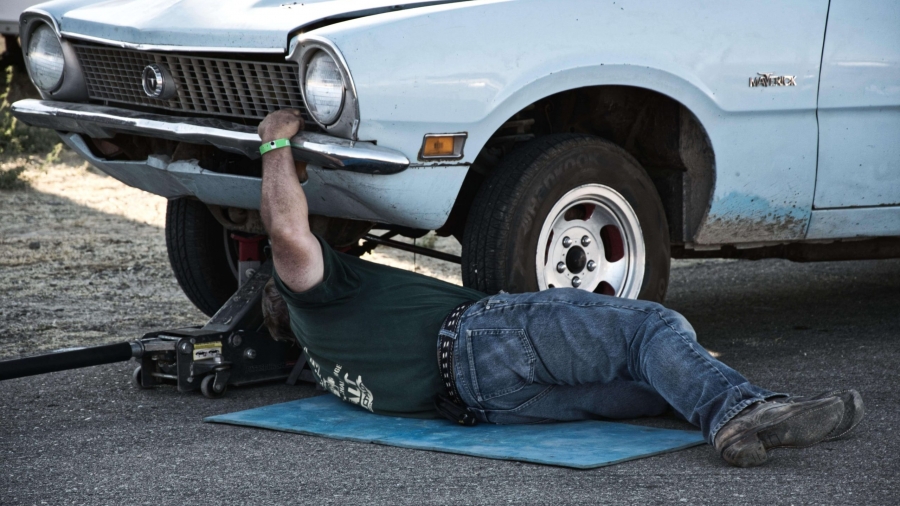 That week went on by quickly, i had back to back meetings with company guests from India. I only managed to see Joe briefly over lunch hour. That Friday however, my boss traveled and so our meetings were adjourned to the following week. I wanted to send a text to Joe but realized we had not exchanged numbers. I rolled my eyes, kicked off my heels and walked out through the back door. I wasn’t very sure of which garage i could find him but i had to find him. I needed to see him and maybe hug him, you know.

I walked around aimlessly and was almost giving up when i saw him leaning against some car. He dropped his spanner and half ran to me,  he hesitated for a minute and took a step back,

”I thought you missed me?”

”My schedule just opened up.”

”I don’t have those hectic meetings till next week.”

His face beamed up and i could see ideas literally floating in his mind.

”Do you know what this means?”

”What does this mean?”

”We have the day to ourselves, let me go change out of this overall.”

I looked at his excited face, he looked so handsome, my head had it’s own ideas, alright.

”I will pick you up in five minutes, don’t keep me waiting, Diana.”

I smiled and walked back to my office. I quickly switched off my desktop and left through the backdoor. I had a feeling this was going to be a good day.

Joe was waiting for me outside, he got out of his car and opened the door for me and closed after i had settled in.

”Where do you have in mind?”

He started the car and pulled out of the parking lot. There was no traffic and soon we were along Kiambu road,

”So, i was thinking of cooking for you.”

”Oh that is nice, do you love cooking? Most women do.”

he turned to look at me, i don’t know if he was disappointed or not, he smiled and held my hand with his free hand.

”You are not most women, you are special. So what do you want to eat? My queen?”

My queen sounded just about right.

”I will eat whatever you cook, king.”

He smiled, that unnerving smile of his. He parked in front of a small grocery shop in Ruaka.

”I am going to pick a few things, do you want to come with?”

”I want you to meet my mama mboga.”

He looked at me with those beautiful eyes of his, how could i say no?

I got out and followed him to the end of the building where a small kibanda was.

She turned to me and stared me down. She wiped her wet hands on her leso before stretching her hand in a very firm handshake.

You know those situations you find yourself in that you cannot get out of? Here was that. I just smiled and nodded as she talked and talked. Finally, she packed for us fried fish and spinach.

A few minutes drive, he stopped at his apartment and led me out. They had an elevator, no stairs. Fancy, huh!

His studio apartment is how i expected his house to be, simply neat and beautiful. He had pegged on a rustic interior design mixed with modern pieces.

A big TV screen was mounted on one wall, a rustic stand just beneath it, with the DSTV decoder and woofer. He had reclining black seats and a small wooden stamp, rough on the eyes but smooth to the touch. A few hangings on the wall and a flower on one side. The curtain a mixture of grey and yellow. The house was beautiful.

”Your house is beautiful.”

”I am humbled, make yourself comfortable.”

I kicked off my shoes and stepped on the rugged carpet,

”Can i offer you anything to drink?”

”Maybe a glass of water, thank you.”

He took off his coat and jeans and headed to the kitchen.

For someone who has poor eating habits, i could not risk drinking anything before eating, not especially if he was cooking. He switched on the TV for me, i flipped through Netflix looking for nothing in particular. After half an hour, he brought the food, ugali, fish and veges.

Let me tell you, the man can cook.

I took the plates to the kitchen and when i came back, he had started a series, Power. If you have not watched power, you need to Ghost is something else especially when he is making out with his clande.

He moved closer to me, i rested my head on his chest and curled up to him. He slipped his hand into my blouse, his long fingers stroked my arm gently, then they moved further in. He reached for my bra and slipped his fingers into my anticipating apples. There is that feeling of getting something that you have been wanting, yes, that magical feeling, he fondled me, i was aroused, i was in need. He turned, and started unbuttoning my blouse, taking his time, taking in the unfolding sight before him, where his eyes landed, his mouth feasted. He had me at his mercy. One by one, my pieces of clothes were thrown on the floor, piece by piece my body surrendered to him. He touched me here, kissed me there, it was all in his eyes, there was that burning desire. He opened the books of my womanhood and fed from the springs of life. Joe took me to the gates of heaven and opened the pearls for me, i was floating on velvet and silk and feathers. My wells erupted like volcanoes and he was there to fetch the waters into his thirsting mouth. I was beyond the mountains of ecstasy, this was a point of no return. I begged him, to stop not, i want the whole of him, i wanted to feel him, i wanted it all. As though responding to my need, he moved back and peeled of rubber and in a slow motion, he filled my cup and the minutes that followed can not be explained. I was lost in pleasure, beautiful pleasure. We both reached the peak of the mountain and collapsed in a heap, covered by our sweat. It took me more than a minute to catch my breath.

”Diana, that was something else.”

He got up and kissed me on the forehead,

”We have the whole day to talk about it, my queen.”

That day, as he drove me back home in the evening, i knew he was going to be apart of my life for a long time.

”Maybe i can have your number?”

”Oh yes, i have been meaning to ask you but i wasn’t sure.”

”Joe, i practically eat lunch from your hands, how can i not give you my number?”

”Diana, you don’t understand the effect you have on me.”

”The effect is mutual, king?”

He smiled and continued driving.

This was going to be one beautiful beginning.